Within the Walls of My Being 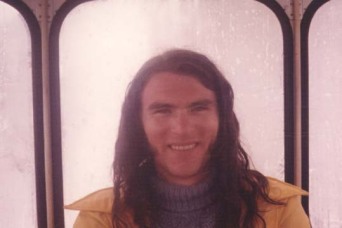 I was conceived in a world
beyond my grasp, beyond my
knowledge. A world for me to be
born in…. and to die.
But what about the “in-between” time?
Can I connect birth, live, and death
into a flowing stream of consciousness?
The only decision that is truly mine
is how I choose to spend my days, hours,
and minutes.

Will I develop my “Being” into something
of significance? Will I find contentment
and enjoyment deep within the walls of my
being, or will I wander through life blindly,
unaware of my own purpose? Will I find this
for myself or will I perish? Only I can decide!

Those lines are from a book titled “Visions of You” by George Betts published by Celestial Arts Publishing during the latter part of the “hippie era” in 1972; the year my nineteenth birthday arrived. That time of “freaks” and “straights” is remembered well. The deep south of  Alabama and Mississippi where I grew up was behind me. Now my home was a rented cottage on Ruxton Avenue under the shadow of Pike’s Peak in Manitou Springs, Colorado, which at that time was a past prime tourist town. Rent was cheap and the empty houses and store fronts had been filled by a good-sized hippie colony.

The late 60’s and early 70’s was a special time when I could pick up a hitch-hiking couple and let them sleep the night on my floor with never a worry about anything bad happening. Those were the days we truly thought we were “brothers and sisters”.

Today the real estate in Manitou Springs is high-priced and vestiges of the 60’s and 70’s when I lived there are mostly long gone. But there still are people around the town you can tell by their hair and clothes still hang on to that time gone by.

I’m told the big turquoise ring I wear on my right hand, the bracelet on my wrist and my somewhat longer length of my hair signifies I too am one of those people. I accept the “old hippie” moniker gladly and am proud to be part of a generation that worked to stop a war, moved women’s and civil rights steps forward, were involved politically and brought sex out of the closet. We were naive, but really did believe in something hopeful and beautiful… at least for a little while.

I wonder if the author of “Visions of You” is the same George Betts who today on-line is found to be a professor at the College of Education and Behavioral Sciences in Greeley, Colorado. He’d be about 68 years old or about 10 years older than me. In the press photo for the school Professor Betts looks today mostly like a kindly grandfather. I wonder … is that how I look now? Being not much more than a year from being sixty years old there is awareness within that I became invisible to college girls decades ago and am also entering my “Grandpa phase”. Many might not think of me today as a “hip dude” as we once called guys who were “with it” and “cool”, but once upon a time that was me (or at least in my own mind I was).

I am proud of my life, my accomplishments and the peace that has been made with my mistakes (and I made some doozies!). My days have been colorful, my experiences rich and I’ve lived more fully than most.  There is still more to come; quite possibly the best parts. I am learning, growing, becoming more aware, finding harmony with myself and a spiritual path is unfolding for me. In some ways I’m picking up where I left off back in my early 20’s and that’s a good thing.

He who takes a stand is often wrong,
but he who fails to take a stand is always wrong.
Anonymous

A seeker working to grow each day and be a better version of my self. Through sharing I commit myself deeper to my ideals and beliefs.
View all posts by James Browning →
This entry was posted in Aging, Life, Perspective and tagged 1960s, hippie, youth. Bookmark the permalink.