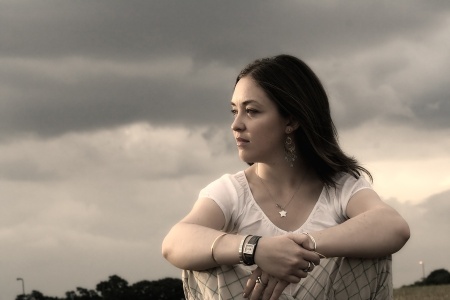 9. They work well in team environments. Because highly sensitive people are such deep thinkers, they make valuable workers and members of teams… However, they may be well-suited for positions in teams where they don’t have to make the final decision. For instance, if a highly sensitive person was part of a medical team, he or she would be valuable in analyzing the pros and cons of a patient having surgery, while someone else would ultimately make the decision about whether that patient would receive the surgery.
10. They’re more prone to anxiety or depression (but only if they’ve had a lot of past negative experiences). But that’s not to say that all highly sensitive people will go on to have anxiety — and in fact, having a supportive environment can go a long way to protecting against this.
11. That annoying sound is probably significantly more annoying to a highly sensitive person. While it’s hard to say anyone is a fan of annoying noises, highly sensitive people are on a whole more, well, sensitive to chaos and noise. That’s because they tend to be more easily overwhelmed and overstimulated by too much activity…
12. Violent movies are the worst. Because highly sensitive people are so high in empathy and more easily over-stimulated, movies with violence or horror themes may not be their cup of tea…
13. They cry more easily. That’s why it’s important for highly sensitive people to put themselves in situations where they won’t be made to feel embarrassed or “wrong” for crying easily… If their friends and family realize that that’s just how they are — that they cry easily — and support that form of expression, then “crying easily” will not be seen as something shameful.
14. They have above-average manners. Highly sensitive people are also highly conscientious people… Because of this, they’re more likely to be considerate and exhibit good manners — and are also more likely to notice when someone else isn’t being conscientious. For instance, highly sensitive people may be more aware of where their cart is at the grocery store — not because they’re afraid someone will steal something out of it, but because they don’t want to be rude and have their cart blocking another person’s way.
15. The effects of criticism are especially amplified in highly sensitive people. Highly sensitive people h ave reactions to criticism that are more intense than less sensitive people. As a result, they may employ certain tactics to avoid said criticism, including people-pleasing (so that there is no longer anything to criticize), criticizing themselves first, and avoiding the source of the criticism altogether…
16. Cubicles = good. Open-office plans = bad. Just like highly sensitive people tend to prefer solo workouts, they may also prefer solo work environments. For those without the luxury of creating their own flexible work schedules (and environments)… highly sensitive people might enjoy working in a cubicle — where they have more privacy and less noise — than in an open-office plan. From an article by Amanda L. Chan on Huffington Post http://www.huffingtonpost.com/2014/02/26/highly-sensitive-people-signs-habits_n_4810794.html?fb_action_ids=10104139268245175&fb_action_types=og.likes&fb_source=other_multiline&action_object_map=%5B715761448444735%5D&action_type_map=%5B%22og.likes%22%5D&action_ref_map=%5B%5D

It is usually the imagination
that is wounded first,
rather than the heart;
it being much more sensitive.
Henry David Thoreau