Know When to Hold ‘Em 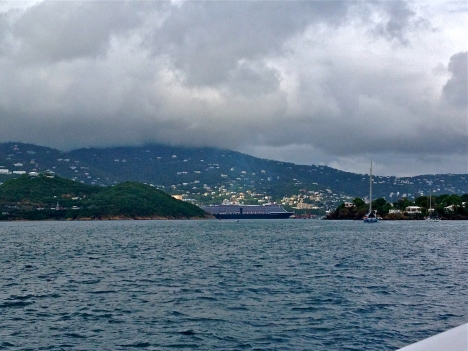 St. Thomas is a pretty island, but a busy one. Business took me there last week and while I enjoyed the visit after a few days I was ready to leave. The cruise ships spill people upon the island like a stomped on anthill creating a contrary experience to what I prefer. I’m more into laid back, casual, out-of-the-way destinations. However, there was one Virgin Island sexperience I will remember for the rest of my life.

Lester was my driver of the van that was summoned to take me to the airport. I was the only passenger and the morning was foggy and misty. My driver was probably somewhere in his late 60’s or early 70’s. While quiet for the most part he did have a smile that appeared genuine and eyes that still had a sparkle for life in them.

About half way to the airport Lester started singing a song at a very low volume that was almost imperceptible. However, here and there were familiar words that I could not place.

So I asked Lester what song he was singing and he replied “Kenny Rogers song called “The Gambler”. He made note that a movie had been made based on the song staring Kenny back when he still looked like Kenny. Then my driver picked up where he left off.

When the chorus came around, I joined Lester for a duet as we softly sang together the words I knew from memory.

Lester went on to do a rendition of “Coward of the County” that was soft and slow. He finished as we turned into the airport. Never will I forget the gentle soul who drove me to the airport on St. Thomas. I told him so and tipped big. An authentic smile came on his face  and our eyes locked for a moment. He said “take good care” and I responded “you too”. Now close to a week later the gratitude for the simple pleasure a stranger gave me is very much alive within. Thanks Lester. I hope you find “an ace you can keep”.

Maybe gratitude has nothing to do with joy.
Maybe being grateful means recognizing
what you have for what it is.
Appreciating small victories.
Admiring the struggle it takes simply to be human.
Maybe we’re thankful for the familiar things we know.
And maybe we’re thankful for the things we’ll never know.
At the end of the day, the fact that we have the courage
to still be standing is reason enough to celebrate.
Meredith Grey

A seeker working to grow each day and be a better version of my self. Through sharing I commit myself deeper to my ideals and beliefs.
View all posts by James Browning →
This entry was posted in Simple Pleasures, Thankfulness, What really matters and tagged caring about others, feelings, heart warming. Bookmark the permalink.