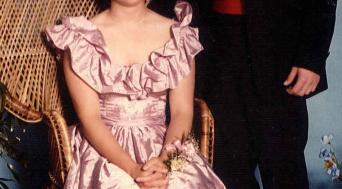 Her name was Evelyn Thompson and she was my girlfriend when I has a junior in high school.  She was a year older and my first serious girlfriend. I loved her to the capacity a 16-year-old boy can.  Never before had I cried over the loss of a girlfriend, but when she broke up with me tears of heartbreak came for the first time. I felt her loss from my life deeply.

While her parents tolerated me, the relationship Evelyn and I had scared them. It’s clear today they wanted her to go to college and being seriously involved with a ‘boy’ was a threat to that. In reality our relationship probably was a bit dangerous for their hopes and who knows what might have happened without the pressure they put on her. Garth Brooks wrote “some of God’s greatest gifts are unanswered prayers”.  Certainly that was true of Evelyn and me. I was such a mess emotionally then and would certainly have made chaos of anything we might have become.

The time was 1969-1970 and my home life was at its peak of dysfunction. My mother’s drinking was escalating and my despised stepfather was getting meaner as he took my adolescence as a serious threat. It was getting harder for him to control and abuse me because I made my own money, paid my own bills, excelled at school and was a good kid. He had nothing to be upset at me about, although he still found reasons that were ever-increasing growing thin.

In a matter of a few months I would stand up to him when he drew back to hit me saying “go ahead. I’ll stomp you until you’re a grease spot”. I was at my breaking point and at that moment there was no doubt my intentions would have been to inflict as much damage to him as possible.  He saw the pent-up rage in my eyes and knew I absolutely meant what I said. He did not touch me that day or ever again. He and my mother threw me into the street three weeks later.

On foot with a suitcase I left walking down the street and never went back. With enough money for two nights I sat in my motel room pondering my options.  I realized there were few.  My part-time job did not yeild enough income to live on my own and go to school at the same time. There was only one choice. I called my Father two hundred miles away who I barely knew.  He heard me say “I have no place to go. Can I come stay with you?” He took me in and gave me the best year of my childhood.  My senior year of high school was happily spent with my Father, stepmother and eight year old half-sister.

Had it not become necessary for me to move two hundred miles away, there is certainty within it would have been Evelyn I eventually sought solace from.  My confidence is strong that she would have tried to help me if I had asked. I also feel certain she could not have given me what I needed to make my life better. Even if we had gotten back together, we were so very young.  With my dysfunctions learned growing up I would have unintentionally torn us apart as I was nowhere near ready for a long-term relationship. Heck, I was not even ready for one then another failed marriage.  Only in more recent times have I arrived at a point of mental clarity where I have a good chance of being in a long-term love relationship successfully.

With some regularity I wonder what happened to Evelyn Thompson of Ashland, Alabama, Class of 1970.  There are no thoughts of trying to rekindle an old flame. I know well there is no going back and life cannot be lived in reversed.  Today I am uncertain how true and deep my love for her really was anyway. What I recall feeling most about her had a lot to do with wanting to feel needed, important and cared about by someone.  She was tender and kind to me; rare commodities in my teen years.

Gratefulness lives deep and solid in my heart for the sweet times Evelyn and I shared.  We never had sex and even making out was never anything past an “R” rating.  The 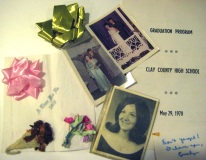 memory I retain is of a relationship that was gentle and caring.  A favorite memory is sitting in her family’s living room listening to Tommy James and the Shondells “Greatest Hits” while holding hands and hugging with an occasional smooch.  We went to different schools and she went to my “Junior-Senior Prom”.  I went to hers.  Buried in an old trunk not opened in years till recently remains a double frame with a photo taken at each prom along with my lapel flower from one or the other.  I have not thought of those things in years.

Years ago I heard she married and was working for the power company in Gadsden, Alabama. I never followed up and it’s just as well. My hope is Evelyn is having a rewarding life blessed with much happiness. The pain of our breakup forty-one years ago has mellowed into sweet and cherished memories I am grateful for.  Evelyn, thank you for being ‘my girl’ once upon a time!

Part of loving is learning to let go.
The Wonder Years Television show

One thought on “Part of Loving is to Let Go”