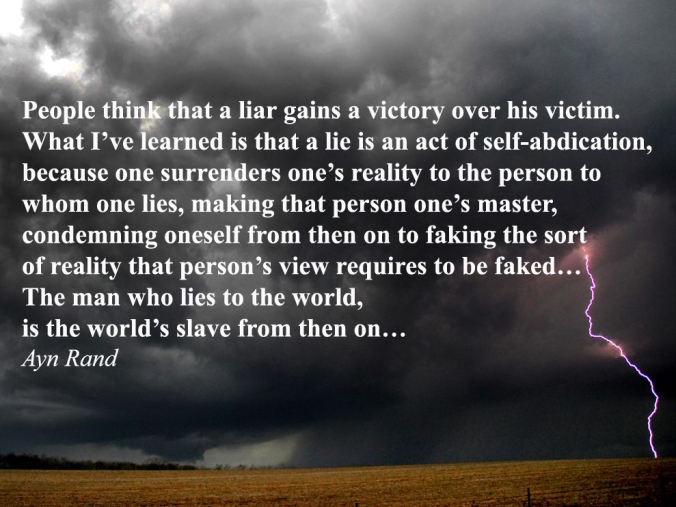 I used to regularly be a liar. With my friends, in business and generally I was a ‘boy scout’ and told the truth. But in love relationships my words at times contained less than the full truth; sometimes very little of the truth.

Now living an authentic life I look back to see it was my insecurities at the root of my lying. I did it to be perceived as more than I actually was. And worse, there were times I was liar to cover my tracks of even greater dishonesty: being unfaithful. Deep down there was a compulsion to fill a hole within using the affection of someone new, however impossible it actually was. And oh, the stress, worry and anxiety of an affair! Doing wrong when one knows it’s wrong, then living with it is a sort of slow strangulation.

Lying requires a lot of effort. When you tell the truth, you simply remember what happens. When you lie you have to consider what you’re trying to hide, figure out a believable version of the opposite, give a convincing performance to sell that lie, and then remember it for the rest of eternity so you never get caught. Furthermore, it builds and builds every time you lie.

Lies, just like many other things, cause stress and anxiety. If you need proof, consider the polygraph machine (what’s come to be known as the “lie detector”). They don’t actually detect lies, specifically, but rather the signs of stress that accompany telling them. While stress isn’t a definitive indicator of lying, it’s often a good clue.

You probably know that stress harms your brain and body in several horrible ways. Since lying contributes to your stress level… you need to consider the impact of your secrets. The harm isn’t self-evident, but it readily exists in the numerous health issues you encounter in your daily life. By Adam Dachis http://lifehacker.com/5968613/what-lying-actually-does-to-your-brain-and-body-every-day

Secrets are poison. Any relationship seasoned even with small ones will suffer a little short-term and a lot eventually. Emotional intimacy can be based only on truth and honesty. To do otherwise is self-foolery, delusional and a touch of self-induced madness. My heart smiles and my mind beams with pride that I learned better to grasp and practice honesty today. I am grateful for the heartache that taught me how to be a ‘good guy’ who tells the truth and is worthy of someone’s complete love. Mistakes are great teachers if one pays attention to the lessons.