An Angel in the Marble 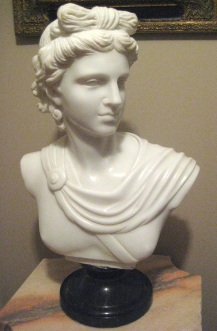 Day in and day out I live with the face of a mystery woman whose name I do not know.  As I leave and come home, she is always there to welcome me or bid me goodbye silently with an expression of contentment on her face.  If there is something I must remember to take with me when I depart, I lay it beside her so I will be reminded not to forget it.  She has been with me for well over a decade now, yet I know nothing about her.

“She” is a marble statue I purchased at an antiques auction in the late 90’s.  The bust is around 24 inches tall and its scale is life-size.  Being solid marble the statue is very heavy.  I can lift her, but only with a great deal of care and strain.

What little research I have done about her has led me to believe she may have been handmade in China sometime in the 20th century, but her face does not match the standard ones typically used to create statues in Asia.  While I wish the bust was from antiquity with an image created during the life of a person of royalty or fame, I suspect she is a fairly modern creation.  While being old would make the bust worth more, it would not cause me to enjoy her more than I do.  There is much gladness to have her residing with me in my home.

There are times I actually speak aloud to her.  Anyone who has lived alone for a few years or more knows about speaking occasionally to photos and other reminders of people; sometimes even to a piece of furniture or appliance.  (I recall reading once upon a time that talking to one’s self was a sign of going crazy and having a conversation with one’s self is a sign of insanity.  So I avoid both labels by making sure I speak to some object or image at home like my mystery lady when talking aloud.  So what if that is a little game I play with myself.  Living alone allows such harmless indulgences).

No matter when my statue was made, it is the face that intrigues me as it appears obvious hers was patterned after real features.  I like to believe the image portrayed is that of a real person who lived in Victorian times when poets like Browning and Barrett were revered and writers like Thoreau were in vogue.  The overall style the face is contained within appears to my unlearned eye to be from antiquity like something from Roman times.  Could the face be one that has been recreated over and over for two thousand years or more?

Sometimes I have wondered who my imagined “Victorian lady” might have been.  My imagination is broad and deep so it is relatively effortless for me to spin a story.  My deductive reasoning (and pure guesswork) tells me she would likely have been European as most wealth of the time was centered there.  Assuming her lineage might be English (for no reason except my roots are) some of the most popular names for women in the mid to late 1800’s were Alice, Millicent, May, Evelyn, Victoria, Violet, Elizabeth, Lily, Anna, Ruth and Emma. I love the names Emma and Anna, but my choice is Elizabeth, fully realizing it is my love of the work of Elizabeth Barrett that causes that selection.

I suspect if Elizabeth was the correct name those close to her would have called her by a nickname like “Lizzy” or “Beth”.  Such a pet name would seem to better fit the slightly mischievous and almost hidden smile on the bust.

Flushing out my imagined story of the presence in my entry way:  I would say “Elizabeth” was created as a likeness of a woman 18-21 years old and the original statue was carved of a just married bride’s face for a well-to-do couple’s home.

I hope “Beth’s” life was good and content as the look on the face appears to be.  If she could know her face had been carried down through the decades or more of being reproduced, I wonder what her reaction might be.  I hope she would be pleased to know even today a man sat down and wrote about her because he was intrigued by her kind face and sweet yet regal expression.  My gratitude is genuine and substantial to have the “old girl” with me as her presence brings me comfort and joy and stirs my imagination.

I also wonder what “Elizabeth” would think of the fact that frequently she wears one of my ball caps or hats?!?  Seems to me she’d laugh about it.

I saw the angel in the marble and carved until I set him free.  Michelangelo

A seeker working to grow each day and be a better version of my self. Through sharing I commit myself deeper to my ideals and beliefs.
View all posts by James Browning →
This entry was posted in People, Simple Pleasures. Bookmark the permalink.

2 Responses to An Angel in the Marble